"Introduction
The following men who are listed in this research aid served during the American Revolution as Frontier Rangers from Northumberland County, Pennsylvania, being employed against the Iroquois Nation. All Pennsylvania counties which bordered upon Indian country maintained companies of rangers whose sole activity was the defense of frontier settlements. Companies of rangers were somewhat smaller than militia companies and usually served under a single officer. Frontier Rangers made frequent forays into wilderness areas along the frontiers and between blockhouses to discover and overtake bands of savages before sufficient numbers could gather to attack white settlements.
When a ranging company fell upon the trail of an Indian party, it was common practice to track the hostiles to their most recent camp, determine the party's strength, and call for reinforcements to destroy the intruders.
Rangers dressed in homespun, and carried their own rifles, knives, and hatchets. They could be characterized as "minute men of the frontier," always ready to hasten together for a mission when an alarm had been given. It was the rangers' duty to alert settlers when an attack had occured, or was anticipated, and they were obliged to escort women and children to a place of safety. As the conflict continued, these men became so expert in this manner of warefare that their natural senses became so highly developed that they could travel by night like an animal and could distinguish sounds of danger which were unheard by others. They could endure lack of food and long forced marches, becoming agile and swift of foot, as well as deadly with their weapons." 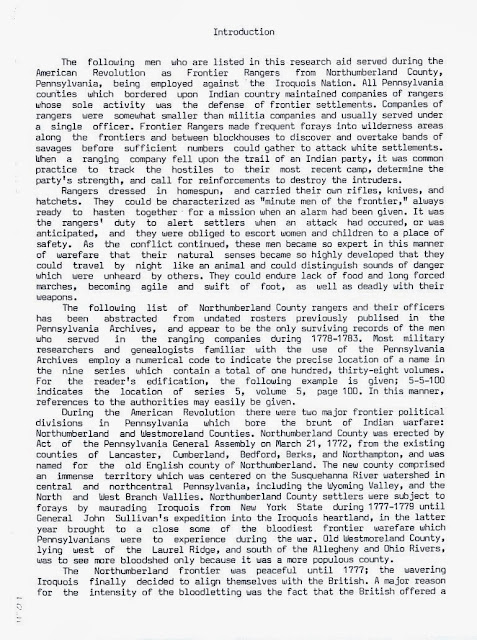 "The following list of Northumberland County rangers and their officers has been abstracted from undated rosters previously publised in the Pennsylvania Archives, and appear to be the only surviving records of the men who served in the ranging companies during 1778-1783. flost military researchers and genealogists familiar with the use of the Pennsylvania Archives employ a numerical code to indicate the precise location of a name in the nine series which contain a total of one hundred, thirty-eight volumes.
For the reader's edification, the following example is given; 5-5-100 indicates the location of series 5, volume 5, page 100. In this manner, references to the authorities may easily be given.
During the American Revolution there were two major frontier political divisions in Pennsylvania which bore the brunt of Indian warfare:
Northumberland and Westmoreland Counties. Northumberland County was erected by Act of the Pennsylvania General Assembly on March 21, 1772, from the existing counties of Lancaster, Cumberland, Bedford, Berks, and Northampton, and was named for the old English county of Northumberland. The new county comprised an immense territory which was centered on the Susquehanna River watershed in central and northcentral Pennsylvania, including the Wyoming Valley, and the North and West Branch Vallies. Northumberland County settlers were subject to forays by maurading Iroquois from New York State during 1777-1779 until General John Sullivan's expedition into the Iroquois heartland, in the latter year brought to a close some of the bloodiest frontier warefare which Pennsylvanians were to experience during the war. Old Westmoreland County, lying west of the Laurel Ridge, and south of the Allegheny and Ohio Rivers, was to see more bloodshed only because it was a more populous county.
The Northumberland frontier was peaceful until 1777; the wavering Iroquois finally decided to align themselves with the British. A major reason for the intensity of the bloodletting was the fact that the British offered a..."

Notes
Bibliography: after p. 58, i.e., p. [1].
Includes a list of 2,900 Northumberland County Frontier Rangers abstracted from the Pennsylvania Archives, series 3, vol. 23. Rangers were employed against the Iroquois during the American Revolution. 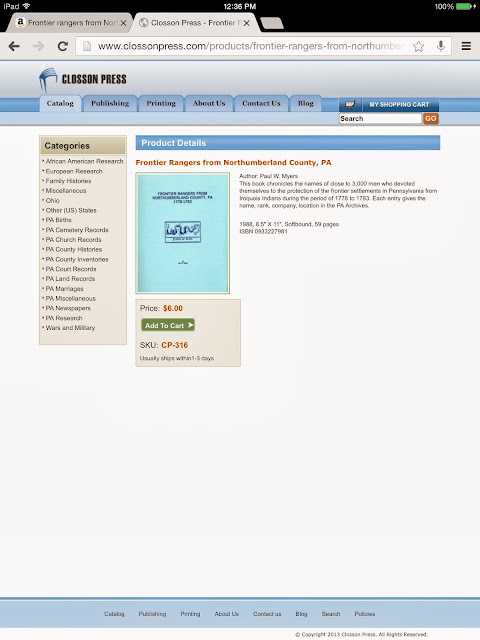