Jackie remembers being scared of the monster that lived under the stair-shaped depressions.

Even more memorable was the "Trout Lake Itch" which ocurred every year.

Was the story of the dock they built for Ben accurate, or was it on the north shore?

https://en.wikipedia.org/wiki/Trout_Lake_Monster
---
Not to be confused with Big trout lake, near Kenora:

Is it a muskrat? An otter? Or perhaps a monster?
Photographs of a strange-looking creature discovered in a remote Northern Ontario aboriginal community are creating a raging Internet debate.
The photos show a brown furry animal with a bald white face and large teeth.
The unsightly critter was spotted in Big Trout Lake by two nurses walking their dog earlier this month. The animal is about 30 centimetres long and has a rat-like tail with "almost a human face," says the community's website.
Some residents of Big Trout Lake, an Oji-Cree community of 1,200 south of Hudson Bay, believe the animal is a rare local creature known as an omajinaakoos, which roughly translates to "ugly one". Band councillor Darryl Sainnawap said his great uncle spotted one about 50 years ago.
"He says in his younger days he was with his grandfather ... and he did see this same creature and that's the last time he saw it," he said. "His grandfather called him omajinaakoos."
Some local elders in the community, which is also known as Kitchenuhmaykoosib Inninuwug, believe the animal is a messenger of bad news.
"No one knows what it is but our ancestors used to call it the Ugly One. Rarely seen but when seen, it's a bad omen. Something bad will happen according to our ancestors," the community's website says.
Mr. Sainnawap, 25, said the animal lives in swamps and feeds on beavers. Asked how the small critter could eat a beaver, he said: "That's a good question. How could a wolverine take down a moose?"
Since the photos were posted on the community's website, they have spread around the Internet, sparking intense speculation about the creature's origins, ranging from the conceivable to the far-fetched.
Some say the animal, which is covered in brown fur everywhere but its face and at least one of its paws, is a water-logged muskrat, otter, possum, mink, beaver or bear cub whose facial fur wore off as its corpse drifted in the lake.
Other commentators, however, believe it is a rare beast, perhaps a version of the Montauk monster, an unidentified animal that washed ashore in Montauk, New York in 2008. Some think it is a type of chupacabra, or goatsucker, a legendary creature that is rumoured to inhabit parts of the Americas.
In any case, the mystery will remain unsolved. After the two nurses found the creature in early May, they left it on the rocky shoreline. Since neither is from the area, Mr. Sainnawap said they assumed it was a common local animal and didn't show the pictures to anyone for a few days.
Once the nurses realized they had discovered an unfamiliar animal, they returned to the spot to find it had disappeared.
"Whether it was eaten by dogs or it was washed away because this was on the shore, or it was eaten by seagulls, I don't know," Mr. Sainnawap said. "All we know is it's not there any more and what's left of it are the pictures."
http://www.theglobeandmail.com/news/national/big-trout-lake-monster-sparks-internet-debate/article1320925/ 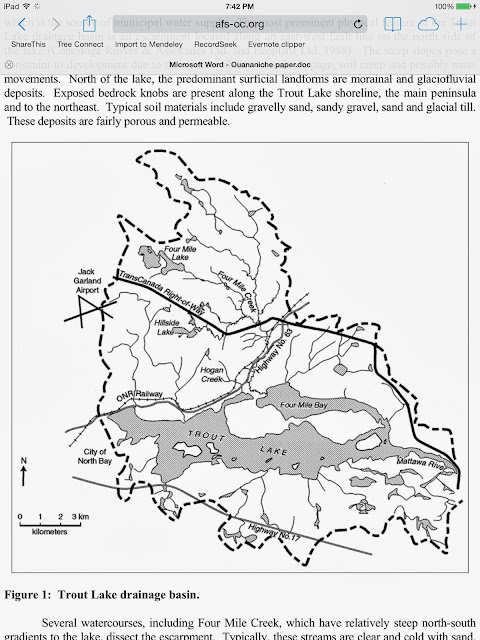