(Draft... Transcribed for Fair Use only.)

[Was this an early version of the 1994 book? See: 'The new book, "Colerain Township Revisited" will include some information from a cookbook history published by the historical society years ago. Wells is updating the information through 1993 and is organizing the information in what she hopes will be a clearer fashion.'] 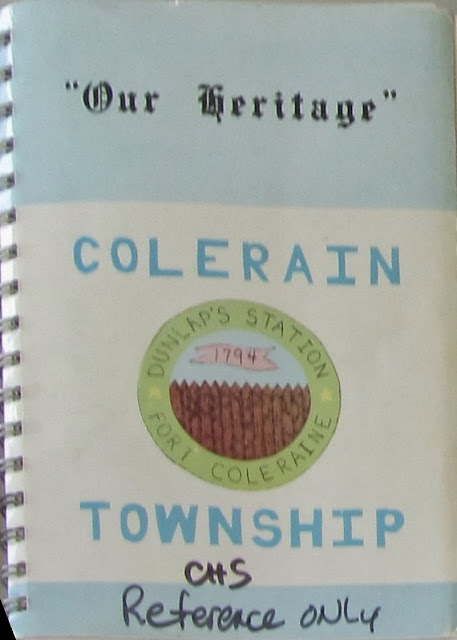 BevisTavernca.1915.jpg
Reply Quote
Sorry, only registered users may post in this forum.
Click here to login
This forum is powered by Phorum.

An inquiry was made about George  McCleave, a Revolutionary soldier, who came with his family to Colerain about 1790. The genealogy of Samuel and Elizabeth (McCleave)  Smith states that George McCleave's wife died soon after their arrival at Dunlap's Station. Elizabeth was keeping house for the motherless family at the time of the Indian attack. She helped to defend the Station by molding bullets as did all of the women in the fort.
She had two brothers, John and Benjamin, and a younger sister, Mary.
About 1803 John McCleave left Coleraine, went to the Dry Forks of White Water in Indiana. In 1814 he again moved westward to what is now Lawrence County, Ill. Benjamin McCleave and his father, George, followed John to Illinois. Although they cannot be found in Hamilton County records, the Butler Co. census of 1807 shows a George McCiief in Fairfield township and Benjamin McClief in Ross.

Posted by Carol Eddleman
THE FAMILY OF ABNER JOHNSON Abner Johnson was born in New Jersey in early June 1759 and by 1777 was a wagoner with George Washington's troops in the Battle of Princeton which cleared all but a small part of eastern New Jersey from the British under Cornwallis. Abner was married to Jemima Hampton and had two sons Carey and Abner. One or both of them "went west" after the Northwest Territory was opened, coming up the Miami valley, one of the first streams to be followed away from the broader and more frequently traveled Ohio. Together with some of the Hedges family they selected land in the valley and extending up the timbered hills rising above it in the area of Ft. Dunlap. Later Abner had married Jane Kirkpatrick and they had six sons and three daughters who grew up in a log cabin on the hills overlooking the "Big Bend" of the river. The daughter Hannah was married first to Anthony Ludwig Hedges. Their children were Jane (Matson), Eliza (Sater), and Mary (Lamb). None of them moved far away and their husbands were all active in the Cincinnati and Coleraine area. After the death of Anthony Hedges at the age of 29, Hannah mar- ried George Tabor Marsh. Marsh had earlier been married to Sarah Ann Smith and had a daughter known to Hannah's children as "Aunt Lockey". They had lived in Cincinnati, but George Marsh and his daughter became integrated in the Venice (later called Ross) neigh- borhood. The family cemetery was established on the low land near the river where repeated floods and natural build up of the soil over the years covered foot stones and low headstones. Jane and Abner lie side by side near a tall well-marked stone, and George Marsh lies by his daughter in another part of the ceme- tery. This neighborhood drew Hannah Johnson's children into the same circles as the Gilliland family. James Gilliland, a Presbyterian minister had made a missionary journey along the Ohio in 1809 and had been pastor at Red Oak, Ohio for many years. His son, Adam Baird Gilliland was with the church in Venice for a long time. And so it came about that Adam Gilliland's son married the daughter of Hannah Johnson Marsh. Their daughter Sarah Johnson Marsh became my grandmother about one hundred years after Hannah's death. Norma Kidd Green (Mrs. Roy M. Green) Lincoln, Nebraska (Mrs. Green is a member of the Colerain Historical Society and her contribution is greatly appreciated). An article by "Conteur" in 1924 stated: "In 1790 John Dunlap and a small group of settlers had established themselves in a remote part of the great tracts purchased by John Cleves Symmes from the Government . In the following years the little colony called Dunlap's Station was abandoned after the route of St. Clair's army because of fear of attack by the victorious Indians. They could recall that in January, 1791, Shawnees led by the famous Blue Jacket, had besieged for two days and nights in great force the 11 pioneers and 13 sold- iers from Ft. Washington until they were driven off by a re-enforce- ment from the fort. Meanwhile, new pioneers had steered their flatboats from Redstone, Penn., now Brownsville, to Dunlap's Station. These new recruits cheer- ed the hearts of the Dunlap settlers and again roused the desire to reclaim the partly cleared region of the Great Miami country. Among these new colonists at Dunlap, in 1792, were Issacher Bevis and Abner Johnson, who had married the sisters Jane and Ann Kirkpatrick." (Source: Bicentennial publication: Our Heritage: Colerain Township, Ohio. Colerain Twp. Bicentennial Committee, 1976.)


Looking for a link to trace the forebearers of my great-great-great grandfather Matthias Johnson (born Nov. 5, 1803 in Stillwater, Sussex County, NJ). Abner Johnson seems to be the closest connection, as his name appears in that area (married Catharine Vogt Sep. 11, 1799) at the time, but no other records have been found.

Reply Quote
Sorry, only registered users may post in this forum.
Click here to login
This forum is powered by Phorum.

Our Heritage33 says James Dunlap was a guardian in 1854 to her McCleave children.
----- 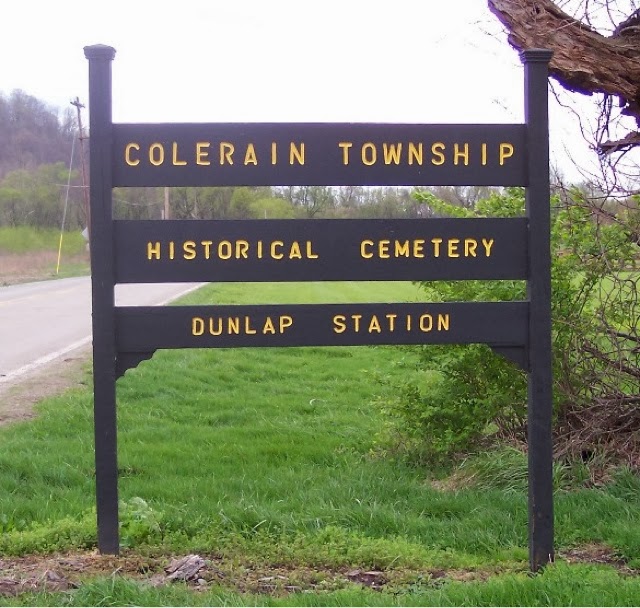