"The 'Stations.' The first of these small forts or stockades was named 'Dunlap's station,' at Colerain, seventeen miles northwest of Cincinnati, about which a good many settlers early concentrated; the second, although at first called by Symmes 'Mill Creek station,' is better known as Ludlow's, and was at Cumminsville, within the present limits of Cincinnati; and the third was probably 'COVALT's station.' A few months later, in November, after Harmar's defeat, Mr. Symmes writes: 'But for the repulse of our army, I should have had several new stations advanced further into the Purchase by next spring; but I now shall be very happy if we are able to maintain the three advanced stations.'"
--Henry A. Ford and Kate B. Ford, History of Hamilton County, Ohio, with illustrations and biographical sketches (Cleveland, OH: L.A. Williams, 1881), 47. (http://www.rootsweb.com/~ohhamilt/histhc/045.htm) 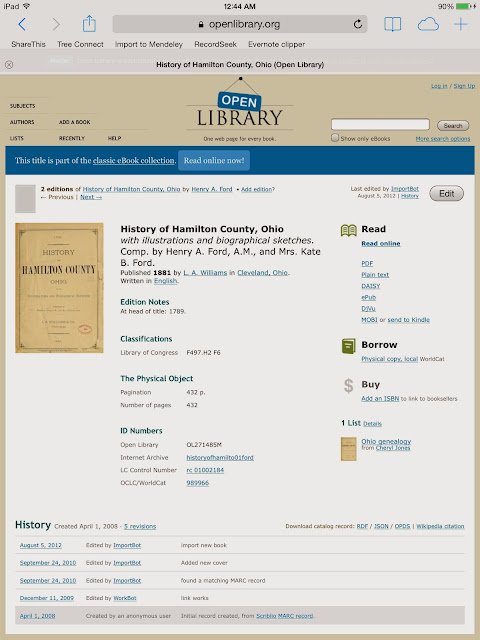 This book has an editable web page on Open Library.

---
pages 372 and 373
transcribed by Linda Boorom
Cary JOHNSON, his son, married Rachel, daughter of John JESSUP, of Mill Creek township, September 12, 1805. Mrs. JOHNSON was an aunt of Mrs. Robert CARY, mother of the famous CARY sisters.  Her grandfather, Stephen JESSUP, was a  weaver's apprentice in England, but ran away from a hard master and came to the new world in the early part of the eighteenth century. He lived a long time in a log cabin on Long Island, and moved thence to Cumberland, Deerfield township, New Jersey, where he accumulated property and made his will February 17, 1757 - a curious old document, now in possession of his great-grandson, Cary B. JOHNSON. He had three sons, John, Isaac, and Daniel; and two daughters, Sarah and Abigail. John was grandfather of C. B. JOHNSON. Daniel was father of Daniel JESSUP, Jr., who became known as "Indian Daniel," from the fact of his capture by the Indians. Isaac went south, and from him was reputed to, be descended General JESSUP, of the United States army. Abigail came to this county, where she married a Mr. GALLAGHER, and became the mother of the celebrated poet and magazinist, W. D. GALLAGHER, thus confirming the notion of the poetic strain in the blood suggested. by the talent of the Cary sisters, who were also, on their mother's side, of the Jessup stock...."