Columbia Township
pg 277
Transcribed by: Judy Tooman
"...Elias HEDGES, a native of Morris county, New Jersey, purchased five hundred acres of land in Colerain township, of Dr. William BURNET and Daniel THEW, probably during the winter of 1804-5; and soon afterward she, with his wife, who, previous to their marriage was: Elizabeth GASTON, a native of the same place, and four small children, set out for the West. They travelled in a wagon - and after a journey of some seven weeks arrived at DUNLAP's Station July 4, 1805. This post was located on the tract purchased by Mr. HEDGES. At the time of his purchase, Mr. HEDGES was not able to pay for so large a tract, its cost being three thousand seven hundred and twenty dollars. So he accepted the offer of two neighbors as partners, with whom he divided his tract in proportion to the money, furnished by each, retaining about two hundred and thirty acres in the middle of the tract for himself. Here, he immediately began to clear the forest and improve his land. Mr. HEDGES continued his occupation with great energy and perseverance until December, 1813, when he became a victim of the "Cold Plague," which scourged a large portion of the west during the summer and fall of that year. Elias HEDGES was highly respected as a good neighbor and man of clear and discriminating judgment; being frequently selected as arbitrator in settling, by amicable means, disputes and contentions which at times sprang up between his neighbors. His early death, at about forty years of age was lamented by all who knew him.
Elizabeth HEDGES, wife of the preceding, survived her husband about eighteen years. They had eight children, seven of whom lived to be men and women. Sarah, their eldest, was born in 1792, and married Alexander JOHNSON early in 1816. He dying in 1822, she afterwards married Stewart McGILL, also a native of New Jersey, who is still living at the venerable age of ninety-three years. Mrs. McGILL died in 1854, respected and loved, by all who knew her. Mary, John G. and Eliza HEDGES died young. Anthony LUDLOW married Hannah A. JOHNSON in 1824, and died in 1831. His widow is still living. Stephen OGDEN married Sarah WHITE in July, 1832. They are both dead. Harriett was married to Bradbury CILLEY in 1834, and is still living, a widow. Elizabeth was born in 1813, and married David K. JOHNSON in August, 1831, died some years since. Her husband is still living at seventy-nine years of age, but during the last fifteen or eighteen years has been entirely blind. He is one of the most highly respected old gentlemen in the country. Elias and Elizabeth HEDGES lie buried at the old Colerain station, in probably the oldest burying-place in the Miami valley, and on the farm which they purchased seventy-six years ago." 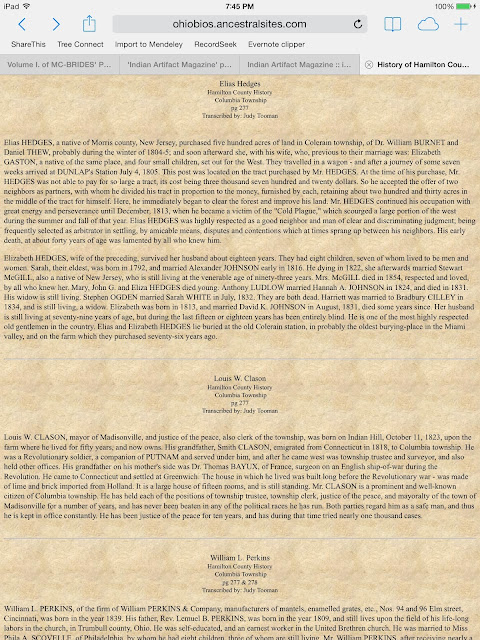