Spooner, Walter Whipple, principle author, with an introduction by Florus B. Plimpton.
The Back-woodsmen, Or, Tales of the Borders : a Collection of Historical and Authentic Accounts of Early Adventure Among the Indians. Cincinnati : Jones Bros., c1883. 608 p. : ill.
Note: "'Girty, the renegade', 'The doomed Wyandot', and 'Sketch of a pioneer', by William D. Gallagher and Otway Curry, respectively, are taken from 'The Hesperian, or Western monthly magazine'."--Pref.
--- 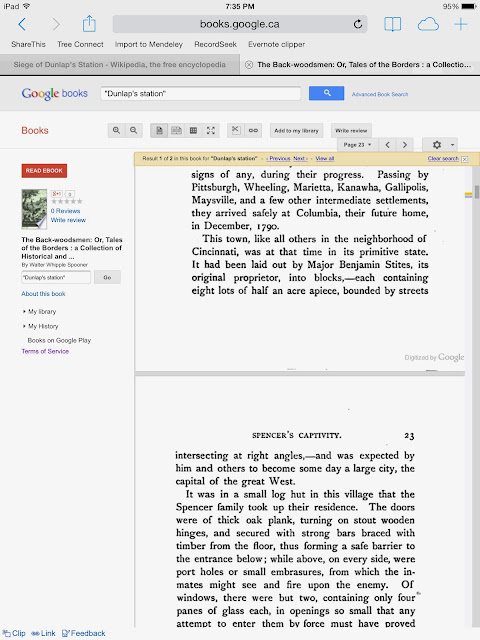 "22
... signs of any, during their progress. Passing by Pittsburgh, Wheeling, Marietta, Kanawha, Gallipolis, Maysville, and a few other intermediate settlements, they arrived safely at Columbia, their future home, in December, 1790.
This town, like all others in the neighborhood of Cincinnati, was at that time in its primitive state. It had been laid out by Major Benjamin Stites, its original proprietor, into blocks,—each containing eight lots of half an acre apiece, bounded by streets 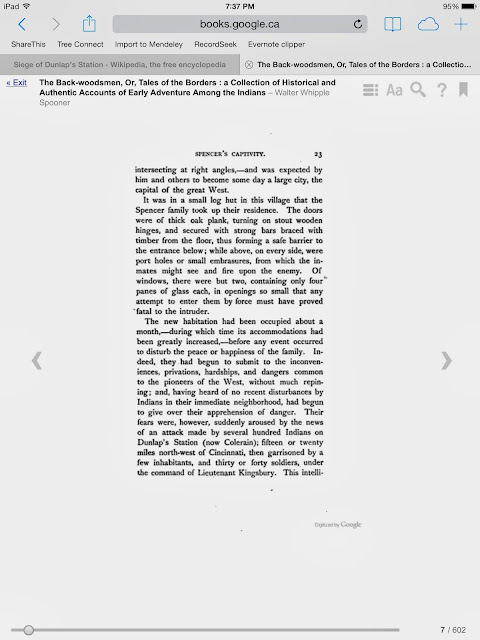 Spencer's Captivity 23
intersecting at right angles,—and was expected by him and others to become some day a large city, the capital of the great West.
It was in a small log hut in this village that the Spencer family took up their residence. The doors were of thick oak plank, turning on stout wooden hinges, and secured with strong bars braced with timber from the floor, thus forming a safe barrier to the entrance below; while above, on every side, were port holes or small embrasures, from which the inmates might see and fire upon the enemy. Of windows, there were but two, containing only four panes of glass each, in openings so small that any attempt to enter them by force must have proved fatal to the intruder.
The new habitation had been occupied about a month,—during which time its accommodations had been greatly increased,—before any event occurred to disturb the peace or happiness of the family. Indeed, they had begun to submit to the inconveniences, privations, hardships, and dangers common to the pioneers of the West, without much repining; and, having heard of no recent disturbances by Indians in their immediate neighborhood, had begun to give over their apprehension of danger. Their fears were, however, suddenly aroused by the news of an attack made by several hundred Indians on Dunlap's Station (now Colerain); fifteen or twenty miles north-west of Cincinnati, then garrisoned by a few inhabitants, and thirty or forty soldiers, under the command of Lieutenant Kingsbury.  This intelli- 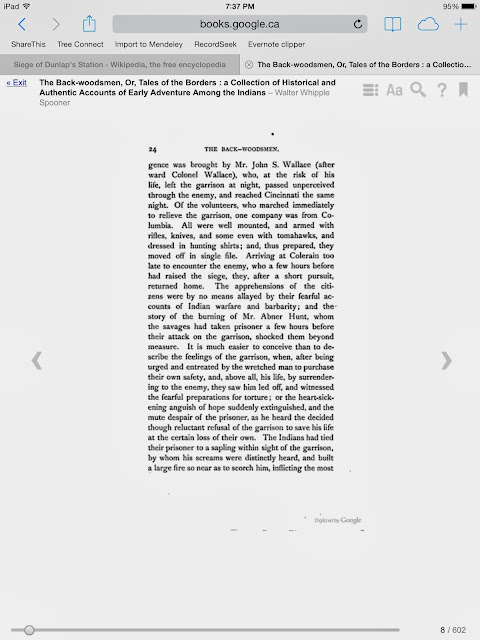 24 The Back-woodsmen
gence was brought by Mr. John S. Wallace (afterward Colonel Wallace), who, at the risk of his life. left the garrison at night. passed unperceived through the enemy, and reached Cincinnati the same night. Of the volunteers. who marched immediately to relieve the garrison. one company was from Columbia. All were well mounted. and armed with riﬂes. knives, and some even with tomahawks. and dressed in hunting shirts; and, thus prepared. they moved off in single ﬁle. Arriving at Colerain too late to encounter the enemy, who a few hours before had raised the siege. they. after a short pursuit, returned home. The apprehensions of the citizens were by no means allayed by their fearful accounts of Indian warfare and barbarity; and the story of the burning of Mr. Abner Hunt, whom the savages had taken prisoner a few hours before their attack on the garrison, shocked them beyond measure. It is much easier to conceive than to describe the feelings of the garrison. when. after being urged and entreated by the wretched man to purchase their own safety, and, above all, his life, by surrendering to the enemy. they saw him led off. and witnessed the fearful preparations for torture; or the heart-sickening anguish of hope suddenly extinguished. and the mute despair of the prisoner, as he heard the decided though reluctant refusal of the garrison to save his life at the certain loss of their own. The Indians had tied their prisoner to a sapling within sight of the garrison. by whom his screams were distinctly heard, and built a large ﬁre so near as to scorch him, inflicting the most 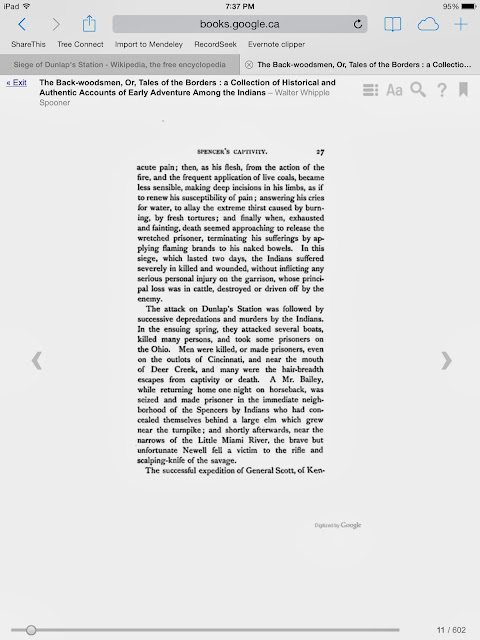 27
acute pain; then, as his ﬂesh. from the action of the ﬁre. and the frequent application of live coals. beanie less sensible, making deep incisions in his limbs. as if to renew his susceptibility of pain; answering his cries for water. to allay the extreme thirst caused by buming, by fresh tortures; and ﬁnally when, exhausted and fainting. death seemed approaching to release the wretched prisoner. terminating his sufferings by applying flaming brands to his naked bowels. ln this siege, which lasted two days, the Indians suffered severely in killed and wounded, without inflicting any serious personal injury on the garrison. whose principal loss was in cattle. destroyed or driven out by the enemy.
The attack on Dunlap's Station was followed by successive depredations and murders by the Indians. In the ensuing spring. they attacked several boats, killed many persons. and took some prisoners on the Ohio. Men were killed. or made prisoners, even on the outskirts of Cincinnati. and near the mouth of Deer Creek. and many were the hair-breadth escapes from captivity or death..."