"Before sunrise on the morning of the tenth of January, just as the women were milking the cows in the fort, the Indians made their appearance before it, and fired a volley, wounding a soldier named MCVICKER. Every man in the fort was immediately posted to the best advantage by the commander, and the fire returned. A parley was then held at the request of the Indians, and Abner HUNT, whom they had taken prisoner as before mentioned, was brought forward securely bound, with his arms pinioned behind him, by an Indian, or, as some say, the notorious Simon GIRTY, the leader of the party, holding him by the rope. Mounting him on a stump within speaking distance of the garrison, he was compelled to demand and urge the surrender of the place, which, in the hope of saving his own life, he did in the most pressing terms, promising. that if it were done, life and property would be held sacred. Not a single individual in the fort, however, would agree to a surrender. Lieutenant KINGSBURY took an elevated position where he could overlook the pickets. and promptly rejected all their propositions, telling them that he had dispatched a messenger to Judge SYMMES, who would soon be up to their relief, with the whole settlement on the Ohio. He failed, however, to impose on them. They replied that it was a lie, as they knew Judge SYMMES was then in New Jersey, and informed him that they had five hundred warriors, and would soon be joined by three hundred more, and that, if an immediate surrender was not made, they would all be massacred, and the station burned. Lieutenant KINGSBURY replied that he would not surrender if he were surrounded by ten thousand devils, and immediately leaped from his position into the fort. The Indians fired at him, and a ball struck off the white plume he wore in his hat. The prisoner HUNT was cruelly tortured and killed within sight of the garrison.
The station was completely invested by the Indians and the attack was most violent. They commenced like men certain of victory and for some time the garrison was in great danger. The Indians fired, as usual, from behind stumps, trees and logs, and set fire to a quantity of brushwood that had been collected by the settlers, and then, rushing in with burning brands, attempted to fire the cabins and pickets. The vigilance and close firing of the besieged, however, prevented the accomplishment of this object. One Indian was killed just as he reached the buildings. In the night they threw blazing arrows from their bows against the stockade and upon the roofs of the buildings, with the intention of firing them; but in this they were also unsuccessful. The garrison, well knowing that their lives depended upon it, met them at every point. The attack was continued without intermission during the whole of the day and the succeeding night, and until nine o'clock in the morning of the 11th, when the Indians, despairing of success, and, perhaps, apprehensive of the arrival of reinforcements from Cincinnati, raised the siege and retreated in two parties, one to the right and the other to the left, as was afterward discovered by their tracks.

The whole strength of the garrison was eighteen soldiers and eight or ten of the settlers capable of bearing arms. The entire number in the fort, including women and children, not counting the soldiers, did not exceed thirty souls. The Indians were estimated by those in the fort at from three to five hundred, led by the infamous renegade, Simon GIRTY, as was ascertained seven years after, on the return of a white man, who had been taken prisoner near the station a few days before the attack.
The little garrison, although but a handful compared with the host by which they were assailed, displayed great bravery., in some instances amounting to rashness. During the incessant fire from both sides they frequently, for a moment, exposed their persons above the tops of the pickets, mocking the savages and daring them to come on. Women, as well as men, used every expedient in their power to provoke and invite the enemy. They exhibited the caps of the soldiers above the pickets as marks to be shot at. According to their own accounts they conducted themselves with great folly as well as bravery, though their apparent confidence may have induced the Indians to raise the siege the sooner. When the garrison was in danger of falling short of bullets, the women melted down all their pewter plates and spoons to keep up the supply.
The garrison, though in imminent danger, sustained but little injury. On the first fire the Indians shot into a building called the mill, where the hand-mill was kept for grinding the corn of the neighboring settlers and the garrison. It stood on a line with and near the block-house, and, being neither chinked nor daubed, the Indians shot between the logs, by which means they killed one man and wounded another.
The body of Abner HUNT, who had been taken prisoner by the Indians few days previous, was found near the fort, shockingly mangled and stripped naked, his head scalped, his brains beaten out, and two war clubs laid across his breast." 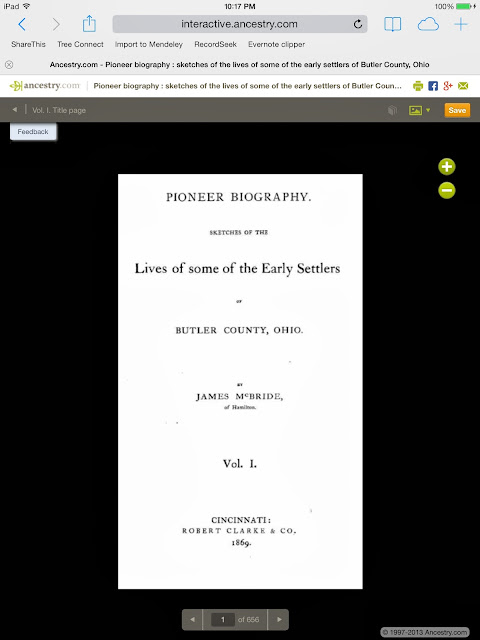 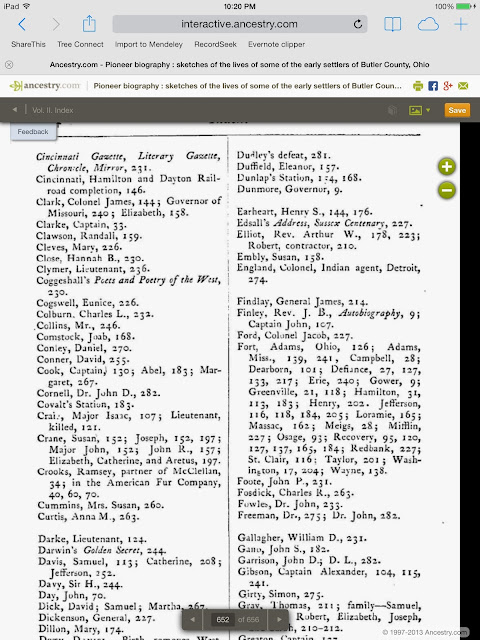 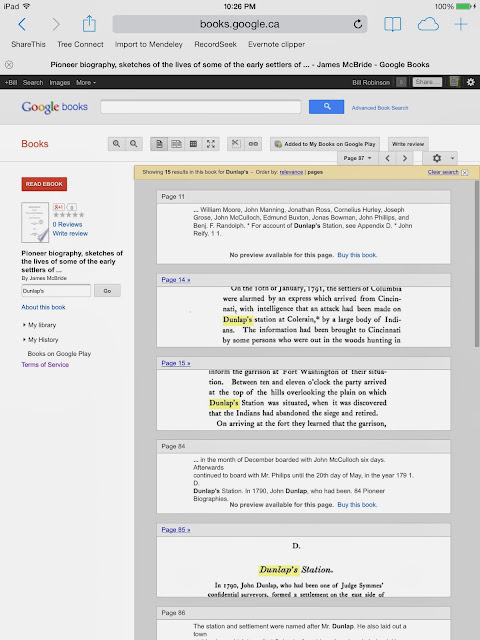 "Page 14
...on the 10th of January, 1791, the settlers of Columbia were alarmed by an express which arrived from Cincinnati, with intelligence that an attack had been made on Dunlap's station at Colerain,* by a large body of Indians. The information had been brought to Cincinnati by some persons who were out in the woods hunting in..."

"Page 15
...inform tne garrison at Fort Washington of their situation. Between ten and eleven o'clock the party arrived at the top of the hills overlooking the plain on which Dunlap's Station was situated, when it was discovered that the Indians had abandoned the siege and retired. On arriving at the fort they learned that the garrison,..."

"Page 85
...D.
Dunlap's Station.
In 1790, John Dunlap, who had been one of Judge Symmes' confidential surveyors, formed a settlement on the east side of..."

"Page 86
The station and settlement were named after Mr. Dunlap. He also laid out a town..." 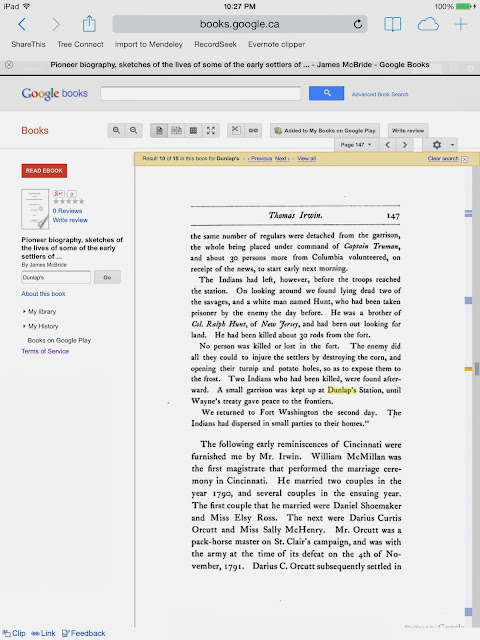 I46 Pioneer Biography.
Mr. Irwin gives the following account of the attack on Dunlap's Station :
Between the first and ninth days of January, 1791, an army of more than two hundred Indians surprised the station. So secret had been their movements that they had approached without discovery within fifty yards of the fort. At the period of their approach the weather was excessively cold, and one of the settlers had gone out at sunrise to cut wood for a fire, and was in the act of getting it in when he discovered the savages within a few rods' distance. He dropped the wood, ran into the fort, and spread the alarm instantly. Lieutenant Kingsbury and his men were just turning out to morning parade.
There were two gates to the fort. To the defense of the small one he assigned two or three men, and with the other seven or eight repaired to the large gate. The Indians appeared in compact order, and received a general volley, which constrained them to draw off. They retreated among the corn, and kept up the contest afterward at a distance.
As the enemy surrounded the fort, there was no chance of despatching an express for aid. In this difficulty they were providentially extricated by the circumstance that a hunter named Cox, who resided at Ludlow's Station on Mill creek, had been out hunting the day before, and finding game abundant at a spot five or six miles of the fort, encamped over night. The morning being then clear and still, he heard the firing distinctly, and deciding as to the cause in his own mind, he started to Cincinnati and informed Governor St. Clair, who was there at the time, of the danger to the settlers.
A volunteer force of 25 or 30 men of which I was one, being in Cincinnati at the time, turned out immediately. About 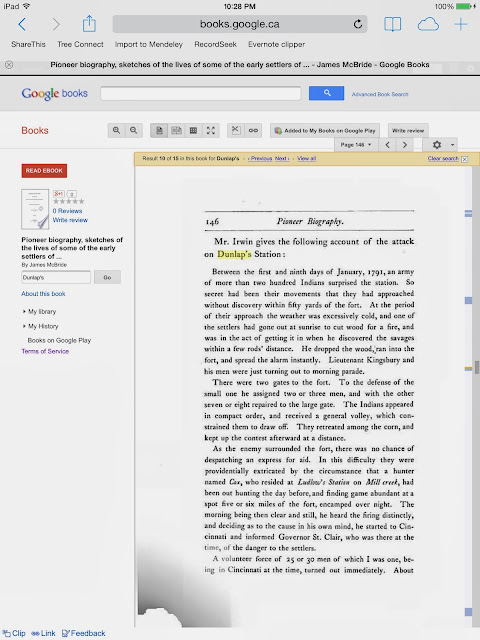 Thomas Irwin. 147
the same number of regulars were detached from the garrison, the whole being placed under command of Captain Truman, and about 30 persons more from Columbia volunteered, on receipt of the news, to start early next morning.
The Indians had left, however, before the troops reached the station. On looking around we found lying dead two of the savages, and a white man named Hunt, who had been taken prisoner by the enemy the day before. He was a brother of Col. Ralph Hunt, of New Jersey, and had been out looking for land. He had been killed about 30 rods from the fort.
No person was killed or lost in the fort. The enemy did all they could to injure the settlers by destroying the corn, and opening their turnip and potato holes, so as to expose them to the frost. Two Indians who had been killed, were found afterward. A small garrison was kept up at Dunlap's Station, until Wayne's treaty gave peace to the frontiers.
We returned to Fort Washington the second day. The Indians had dispersed in small parties to their homes."
The following early reminiscences of Cincinnati were furnished me by Mr. Irwin. William McMillan was the first magistrate that performed the marriage ceremony in Cincinnati. He married two couples in the year 1790, and several couples in the ensuing year. The first couple that he married were Daniel Shoemaker and Miss Elsy Ross. The next were Darius Curtis Orcutt and Miss Sally McHenry. Mr. Orcutt was a pack-horse master on St. Clair's campaign, and was with the army at the time of its defeat on the 4th of November, 1791. Darius C. Orcutt subsequently settled in..." 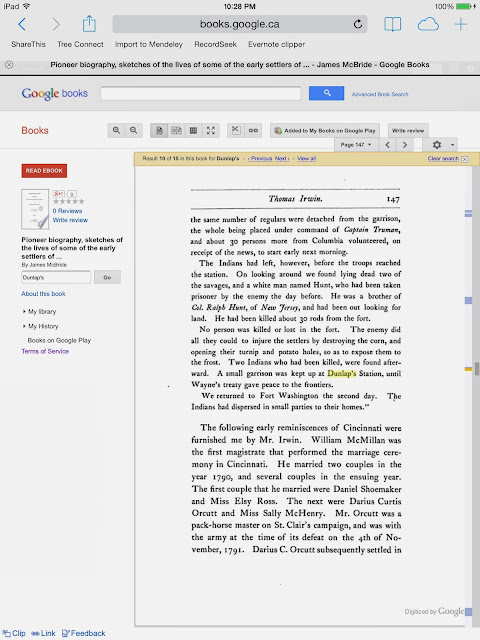