Transcription of the Executive Journal of the Northwest Territory


THE EXECUTIVE JOURNAL of the
NORTHWEST TERRITORY

Preface
One of the most, if not the most, valuable holdings of the Library of the Ohio State Museum is the Executive Journal of the Northwest Territory. In it are recorded all of the official acts and communiques of the governor, Arthur St. Clair, and the secretary, Winthrop Sargent. Singly and individually, it is the most important historical manuscript dealing with the Northwest Territory from its inception in 1788 to its demise with the creation of the state of Ohio.
This transcription is an attempt to make as true a copy as possible of the original. Marginal notes are included in the margins, together with such other signs and information as are included in the original. Also, the transcription follows the original line for line and word for word. No editing whatsoever has been done except in cases of spelling which might possibly be misconstrued by the present-day reader.
This journal was kept by three secretaries: Winthrop Sargent, July 9, 1788 - May 31, 1798; William Henry Harrison, June 3l, 1799 - Dec. 31, 1799; Charles Willing Byrd, Jan. 1, 1800 - January 15, 1803. Of these, Winthrop Sargent kept, by far, the most nearly full and accurate account of the happenings in the territory. There is little doubt, also, that Sargent wielded more authority than his successors, and, one may say with some assurance, that much of the success of the government of the territory was because of Sargent's continuing interest in and promotion of that government.
The 535 pages of the original manuscript are numbered in the transcription in the left-hand margin. The first entries of the years in which the journal was kept are on the following pages:
transcribed by:Richard C. Knopf,Historical Editor &Research Historian,The Anthony Wayne Parkway Board,March 18, 1957..."

His Excellency absent in Kentuckey the following Proclamation was issued by the Secretary. Whereas I have received Information that several small Parties of Friendly Indians are on their Way to Fort Washington, who may probably take the Route by Dunlap's Station, the north Bend, south Bend, Covalts Station or Columbia, And who will shew a white Flag, the Flag of the United States or some other Token of a pacifick Disposition - This is therefore to require of all the Inhabitants of either of the before mentioned Staticns, the north Bend, South Bend, Cincinnati, Columbia,

181
And all others, Citizens of the United States -- or others residing or being within this Territory, who may fall in with, or meet the before mentioned Parties of friendly Indians, or either of them, or other Indians evidently demonstrating Signs of Friendship and the Inclination to visit the commanding General, That they refrain all Acts of Hostility towards them, And conduct them by the shortest and most expeditious Route to Me, at his Excellency's Quarters in Fort Washington, as they shall answer the contrary at their Peril.
Given under my Hand and the Seal of the Territory at Fort Washington in the County of Hamilton, this Eighteenth Day of August in the Year of our Lord one thousand seven hundred and ninety one and of the Independence of the United States the sixteenth.
Winthrop Sargent."
http://ww2.ohiohistory.org/onlinedoc/northwest/exjournal/0181.cfm 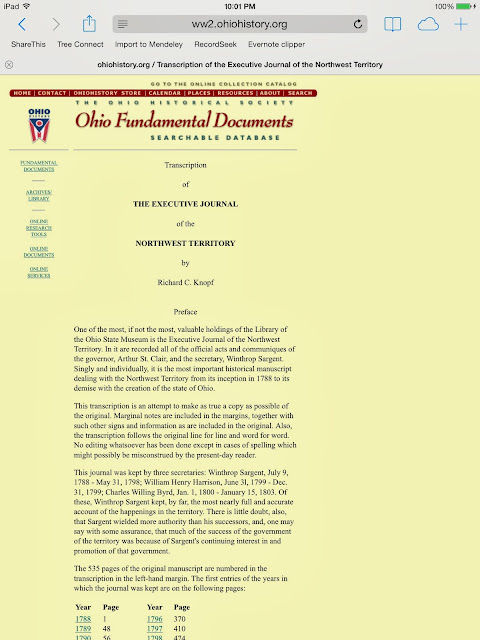