Transcript for Fair Use only: 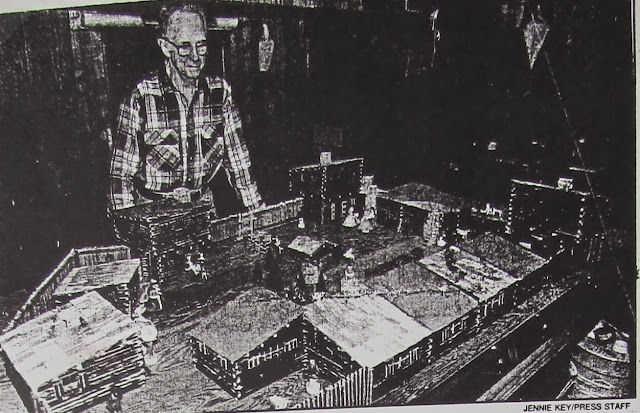 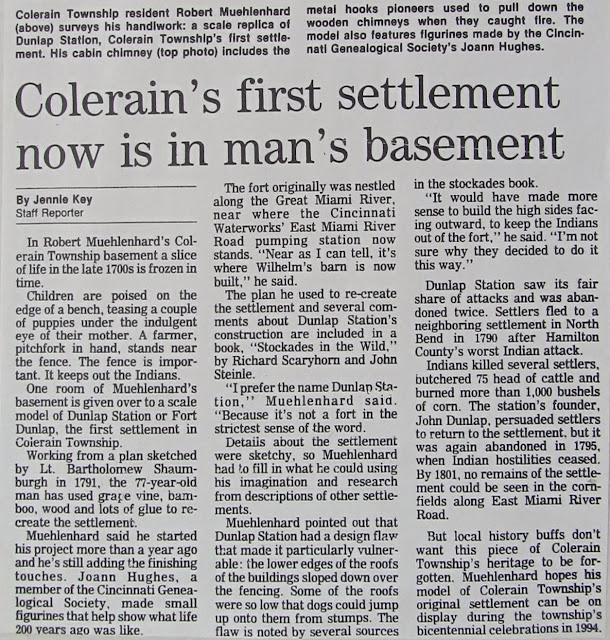 In Robert Muehlenhard's Colerain Township basement a slice of life in the late 1700s is frozen in time.
Children are poised on the edge of a bench, teasing a couple of puppies under the indulgent eye of their mother. A farmer, pitchfork in hand, stands near the fence. The fence is important. It keeps out the Indians.
One room of Muehlenhard's basement is given over to a scale model of Dunlap Station or Fort Dunlap, the first settlement in Colerain Township.
Working from a plan sketched by Lt. Bartholomew Shaumburgh in 1791, the 77-year-old man has used grapevine, bamboo, wood and lots of glue to recreate the settlement.
Muehlenhard said he started his project more than a year ago and he's still adding the finishing touches. Joann Hughes, a member of the Cincinnati Genealogical Society, made small figurines that help show what life 200 years ago was like.
The fort originally was nestled along the Great Miami River, near where the Cincinnati Waterworks' East Miami River Road pumping station now stands. "Near as I can tell, it's where Wilhelm's barn is now built," he said.
The plan he used to re-create the settlement and several comments about Dunlap Station's construction are included in a book, "Stockades in the Wild," by Richard Scaryhorn and John Steinle.
"I prefer the name Dunlap Station," Muehlenhard said. "Because it's not a fort in the strictest sense of the word.
Details about the settlement were sketchy, so Muehlenhard had to fill in what he could using his imagination and research from descriptions of other settlements.
Muehlenhard pointed out that Dunlap Station had a design flaw that made it particularly vulnerable: the lower edges of the roofs of the buildings sloped down over the fencing. Some of the roofs were so low that dogs could jump up onto them from stumps. The flaw is noted by several sources in the stockades book.
"It would have made more sense to build the high sides facing outward, to keep the Indians out of the fort," he said. "I'm not sure why they decided to do it this way."
Dunlap Station saw its fair share of attacks and was abandoned twice. Settlers fled to a neighboring settlement in North Bend in 1790 after Hamilton County's worst Indian attack.
Indians killed several settlers, butchered 75 head of cattle and burned more than 1,000 bushels of corn. The station's founder, John Dunlap, persuaded settlers to return to the settlement, but it was again abandoned in 1795, when Indian hostilities ceased. By 1801, no remains of the settlement could be seen in the cornfields along East Miami River Road.
But local history buffs don't want this piece of Colerain Township's heritage to be forgotten. Muehlenhard hopes his model of Colerain Township's original settlement can be on display during the township's bicentennial celebrations in 1994.