"Carlisle, Feb. 23. We are informed from good authority, that a party of 70 Indians lately presented themselves before Dunlap's station, (a small stockade, not far from general Harmar's head-quarters) garrisoned by about 30 regulars and about twenty inhabitants of the vicinity, under the command of lieutenant Kingsborough. The Indians had previously taken a Mr. Hunt prisoner, with two or three others, whom they hoisted on their shoulders before the fort, directing them to inform the commanding officer, that their party consisted of three hundred. They then demanded a surrender of the garrison. The lieutenant answered, that if they were three hundred devils, he would not surrender; and immediately fired on the Indians, twelve of whom were killed. The remainder, after having quartered Mr. Hunt, in the view of the fort, made a rapid retreat: none of the garrison were either killed or wounded." 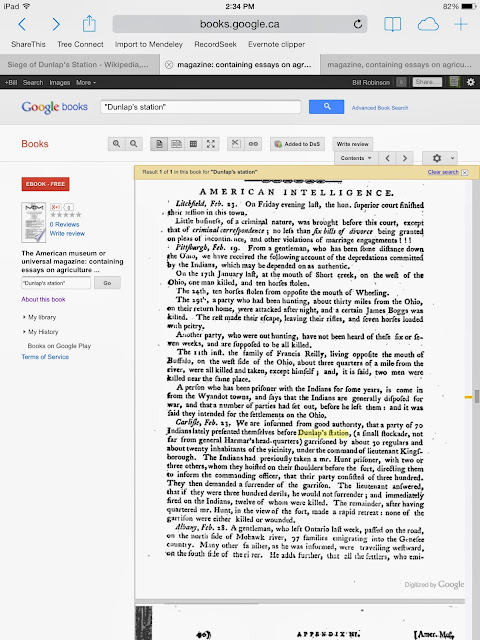 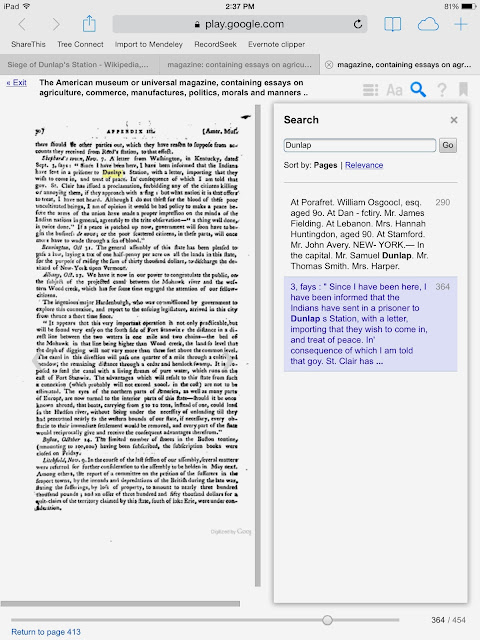 [fs = Ss]
"Appendix...
Shepherd's town, Nov. 7. A letter from Washington, in Kentucky, dated Sept. 3, 1791 Since I have been here, I have been informed that the Indians have sent in a prisoner to Dunlap's Station, with a letter, importing that they wish to come in, and treat of peace. In consequence of which I am told that gov. St. Clair has issued a proclamation, forbidding any of the citizens killing or annoying them, if they approach with a flag; but what nation is it that offers to treat, I have not heard. Although I do not thirst for the blood of these poor uncultivated beings, I am of the opinion it would be bad policy to make a peace before the arms of the union have made a proper impression on the minds of the Indian nations in general, agreeably to the trite observation --" a thing well done is twice done." If a peace is patched up now, government will soon have to begin the business de novo; or the poor feathered citizens, in these parts, will once more have to wade through a sea of blood."