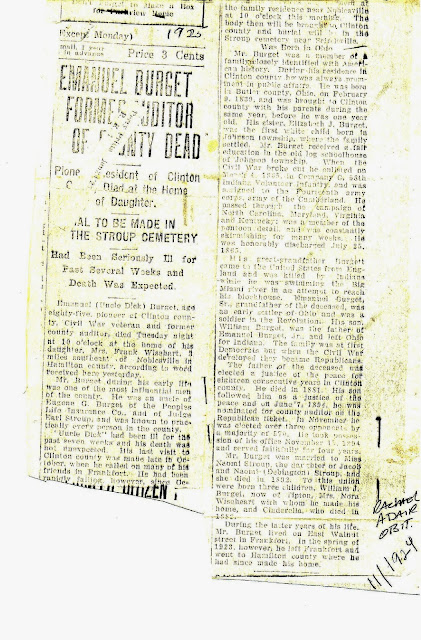 Emanual Burget former auditor of County dead
Pioneer resident of Clinton County died at the home of daughter
Burial to be made in the Stroup Cemetery
Had been seriously ill for past several weeks and death was expected.
Emanuel (Uncle Dick) Burget, age eighty-five, pioneer of Clinton County, Civil War veteran and former County auditor, died Tuesday night at 10 o'clock at the home of his daughter, Mrs. Frank Wisehart, 3 miles southeast of Noblesville in Hamilton County, according to word received here yesterday.
Mr. Burget during his early life was one of the most influential men of the county. He was uncle of Eugene O. Burget of the People's Life Insurance Company., and of Judge Earl Stroup, and was known to practically every person in the county.
"Uncle Dick" had been ill for the past seven weeks and his death was not unexpected. His last visit to Clinton County was made late in October when he called on many of his friends in Frankfort. He had been rapidly failing however, since October, the result of infirmities incident to advanced age.
Funeral services will be held at the family residence near Noblesville at 10 o'clock this morning. The body then will be brought to Clinton County and burial will be in the Stroup Cemetery near Scircleville.
Was born in Ohio
Mr. Burget was a member of the family closely identified with American history. During his residence in Clinton county he was always prominent in public affairs. He was born in Butler county. Ohio, on February 10, 1835, and was brought to Clinton county with his parents during the same year, before he was one year old. His sister, Elisabeth Burget was the first white child born in Johnson township, where the family settled. Mr. Burget received a fair education 'In the old log schoolhouse of Johnson township. When the Civil. War broke out he enlisted in the Indiana Volunteer Infantry and was assigned to Company C, Potomac Army Corps, army of the Cumberland. He passed through the campaigns of North Carolina, Maryland, Virginia and Kentucky, was a member of the pontoon detail, and was constantly skirmishing for many weeks. He was honorably discharged July 25, 1585.
His great-grandfather Burgett came to the United States from England and was killed by Indians while he was swimming the Big Miami River in an attempt to reach his blockhouse. Emanuel Burget  Sr., grandfather of the deceased, was an early settler of Ohio and was a soldier in the Revolution. His son, William Burget was the father of the Emanual Burget, Jr. and left Ohio for Indiana. The family was at first Democrats but when the Civil War developed they became Republicans.
The father of the deceased was elected a justice of the peace for 18 consecutive years in Clinton County. He died in 1881. His son followed him as a justice of the peace and on June 7, 1894, he was nominated for County auditor on the Republican ticket. In November he was elected over three opponents by majority of 570. He took possession of this office November 15, 1894 and served faithfully for four years.
Mr. Burget was married to Miss Naomi Stroup, the daughter of Jacob and Naomi (Debington) Stroup, and she died in 1892. To  this union were born three children, William, now in Tipton, Mrs. Nora Wisehart, with whom he made his home, and Cinderella, who died in 1882.
During the latter years of his life, Mr. Burget lived on East Walnut Street in Frankfurt. In the spring of 1888 however he left Frankfurt and went to Hamilton County where he had since made his home. 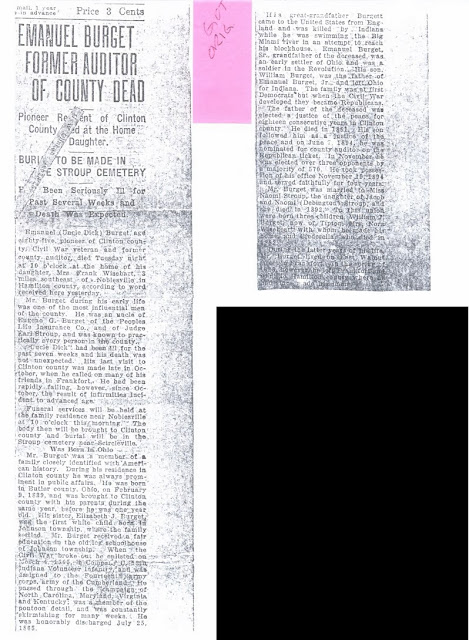