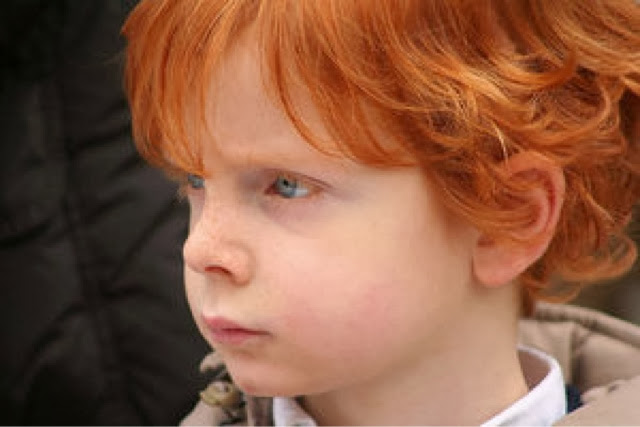 The red-hair gene is most common in Irish blood.

The blood in Irish veins is Celtic, right? Well, not exactly. Although the history many Irish people were taught at school is the history of the Irish as a Celtic race, the truth is much more complicated, and much more interesting than that ... Research done into the DNA of Irish males has shown that the old Anthropological attempts to define 'Irish' have been misguided. As late as the 1950s researchers were busy collecting data among Irish people such as hair colour and height, in order to categorise them as a 'race' and define them as different to the British. In fact British and Irish people are closely related in their ancestry. Research into Irish DNA and ancestry has revealed close links with Scotland stretching back to before the Ulster Planation of the early 1600s. But the closest relatives to the Irish in DNA terms are actually from somewhere else entirely! 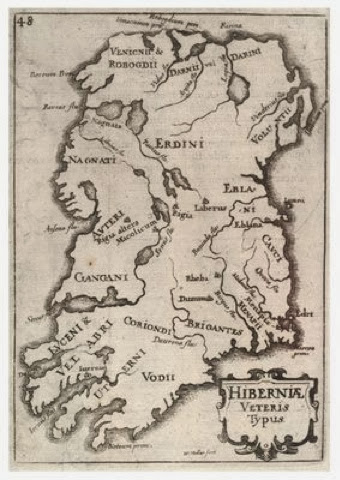 Medieval map of Ireland, showing Irish tribes. Irish origin myths confirmed by modern scientific evidence
Irish Blood: origins of DNA The earliest settlers came to Ireland around 10,000 years ago, in Stone Age times. There are still remnants of their presence scatter across the island. Mountsandel in Coleraine in the North of Ireland is the oldest known site of settlement in Ireland - remains of woven huts, stone tools and food such as berries and hazelnuts were discovered at the site in 1972. But where did the early Irish come from? For a long time the myth of Irish history has been that the Irish are Celts. Many people still refer to Irish, Scottish and Welsh as Celtic culture - and the assumtion has been that they were Celts who migrated from central Europe around 500BCE. Keltoi was the name given by the Ancient Greeks to a 'barbaric' (in their eyes) people who lived to the north of them in central Europe. While early Irish art shows some similarities of style to central European art of the Keltoi, historians have also recognised many significant differences between the two cultures. The latest research into Irish DNA has confirmed that the early inhabitants of Ireland were not directly descended from the Keltoi of central Europe. In fact the closest genetic relatives of the Irish in Europe are to be found in the north of Spain in the region known as the Basque Country. These same ancestors are shared to an extent with the people of Britain - especially the Scottish. DNA testing through the male Y chromosome has shown that Irish males have the highest incidence of the haplogroup 1 gene in Europe. While other parts of Europe have integrated contiuous waves of new settlers from Asia, Ireland's remote geographical position has meant that the Irish gene-pool has been less susceptible to change. The same genes have been passed down from parents to children for thousands of years. This is mirrored in genetic studies which have compared DNA analysis with Irish surnames. Many surnames in Irish are Gaelic surnames, suggesting that the holder of the surname is a descendant of people who lived in Ireland long before the English conquests of the Middle Ages. Men with Gaelic surnames, showed the highest incidences of Haplogroup 1 (or Rb1) gene. This means that those Irish whose ancestors pre-date English conquest of the island are direct descendants of early stone age settlers who migrated from Spain. 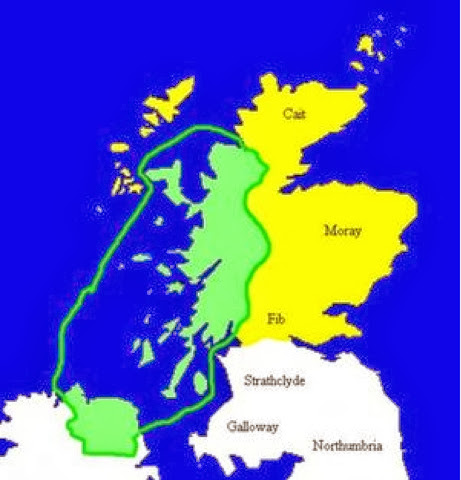 The Kingdom of Dalriada c 500 AD is marked in green. Pictish areas marked yellow. Irish and British DNA : a comparison
Irish origin myths confirmed by modern scientific evidence One of the oldest texts composed in Ireland is the Leabhar Gabhla, the Book of Invasions. It tells a semi-mythical history of the waves of people who settled in Ireland in earliest time. It says the first settlers to arrive in Ireland were a small dark race called the Fir Bolg, followed by a magical super-race called the Tuatha de Danaan (the people of the goddess Dana). Most interestingly, the book says that the group which then came to Ireland and fully established itself as rulers of the island were the Milesians - the sons of Mil, the soldier from Spain. Modern DNA research has actually confirmed that the Irish are close genetic relatives of the people of northern Spain. While it might seem strange that Ireland was populated from Spain rather than Britain or France, it is worth remembering that in ancient times the sea was one of the fastest and easiest ways to travel. When the land was covered in thick forest, coastal settlements were common and people travelled around the seaboard of Europe quite freely. I live in Northern Ireland and in this small country the differences between the Irish and the British can still seem very important. Blood has been spilt over the question of national identity. However, the lastest research into both British and Irish DNA suggests that people on the two islands have much genetically in common. Males in both islands have a strong predominance of Haplogroup 1 gene, meaning that most of us in the British Isles are descended from the same Spanish stone age settlers. The main difference is the degree to which later migrations of people to the islands affected the population's DNA. Parts of Ireland (most notably the western seaboard) have been almost untouched by outside genetic influence since hunter-gatherer times. Men there with traditional Irish surnames have the highest incidence of the Haplogroup 1 gene - over 99%. At the same time London, for example, has been a mutli-ethnic city for hundreds of years. Furthermore, England has seen more arrivals of new people from Europe - Anglo-Saxons and Normans - than Ireland. Therefore while the earliest English ancestors were very similar in DNA and culture to the tribes of Ireland, later arrivals to England have created more diversity between the two groups. Irish and Scottish people share very similar DNA. The obvious similarities of culture, pale skin, tendancy to red hair have historically been prescribed to the two people's sharing a common celtic ancestry. Actually it now seems much more likely that the similarity results from the movement of people from the north of Ireland into Scotland in the centuries 400 - 800 AD. At this time the kingdom of Dalriada, based near Ballymoney in County Antrim extended far into Scotland. The Irish invaders brought Gaelic language and culture, and they also brought their genes. Irish Characteristics and DNA The MC1R gene has been identified by researchers as the gene responsible for red hair as well as the accompanying fair skin and tendency towards freckles. According to recent research, genes for red hair first appeared in human beings about 40,000 to 50,000 years ago. These genes were then brought to the British Isles by the original settlers, men and women who would have been relatively tall, with little body fat, athletic, fair-skinned and who would have had red hair. So red-heads may well be descended from the earliest ancestors of the Irish and British. A spoof (and very funny) exploration into the characteristics of all Irish-blooded males can be read at this link: www.irishtimes.com/newspaper/weekend. Identified genes include IMG or the Irish Mother Gene and the GK (MF) S Gene Kelly-Michael-Flately-Syndrome which explains the inability of the Irish man to move his hips while dancing! Marie McKeown lives in Ireland where she works on community projects, teaching arts workshops and conflict resolution skills. She also teach workshops on self-care and personal development. She has many interests including health, creative writing, travel, history, and my native Ireland. She graduated with a degree in Spanish and Medieval History and has lived in Spain and East Asia and Latin America.