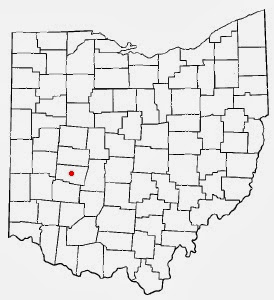 (1779), near Springfield
A Shawnee Indian stockaded settlement, located on the Mad River west of town. Attacked and destroyed by American Patriot forces under George Rogers Clark in August 1780 (Battle of Peckuwe).

(Piqua Historical Area State Memorial)
(1794 - 1795, 1812 - 1815), near Piqua
A stockaded U.S. Army supply post with a blockhouse. Earthworks still remain and the current blockhouse is a reconstruction. The original blockhouse was not in use during the War of 1812. Another blockhouse was built nearby in 1812, which was known as Fort at (John) Johnston's Farm. Johnston was the Indian agent at Lower Piqua during the war.

The Shawnee Indian village of Lower Piqua was fortified in 1780. Attacked by American Patriot forces under George Rogers Clark in November 1782 (Battle of Piqua).
...
Cincinnati Blockhouse (1)

(1778 - 1780), Cincinnati
A British post was here during the American Revolution. It was captured and later destroyed by George Rogers Clark and the VA militia.