Most researchers have encountered a situation in which two people with the same first and last names have been identitied as one person. Eventually, something doesn’t fit, and the error is suspected and corrected, The error often occurs when two people of the same name were in the sane location perhaps at the same time, were related, had the same occupation, made the same move, or were associated with the same people.

John Dunlap, the Ohio surveyor who married Sarah Goode went to Lawrence County, Illinois, has been identified, apparently erroneously. as the John Dunlap who surveyed land in what became Hamilton County Ohio as early as 1789 He gave the name Coleraine to a settlement there and to Colerain Township in Hamilton County.

Additional reference is made to Ford`s History of Hamilton County2 which says that John Dunlap was one of John Symmes’ confidential surveyors and was inclined to land speculation, surveying a townsite and settling lots, to which he did not have title. Ford lists John Dunlap among the first township officers in 1794, although Dunlap is not on several lists given of early inhabitants.

Sketches and Statistics of Cincinnati in 1859 3 says John Dunlap ‘appears to have been engaged in the surveys of Symmes' purchase as early as Jan. 8. 1789.' Our Heritage continues:

John Dunlap, who gave the name Colerain to the township, seems also to have emigrated to Lawrence County. Illinois, where he surveyed and platted the county seat in 1821, and was one of the first three county commissioners. It is believed he died someone in 1822 or 1823. He had a son, Samuel, who was one of the first Senators in the Illinois Legislature. In 1830, John Dunlap`s widow, Sarah Goode Dunlap. married Benjamin McCleve. There were probably more children of John and Sarah (Goode) Dunlap, for Benjamin McCleve, Jr. married Ester Dunlap in 1832. Other Dunlaps appear in these eariy Illinois marriage records. John must have had a son James born in Illinois. James Dunlap served as a guardian for Esther (Dunlap) McCleave’s minor children in 1854.

The several above accounts in Our Heritage5 probably incorporated two John Dunlaps into one John Dunlap. The John Dunlap who married Sarah Goode was indeed a surveyor and went to Lawrence County, Illinois, but it appears he was too young to have been Symmes' surveyor in 1789. The following data on his line is compiled from several sources. 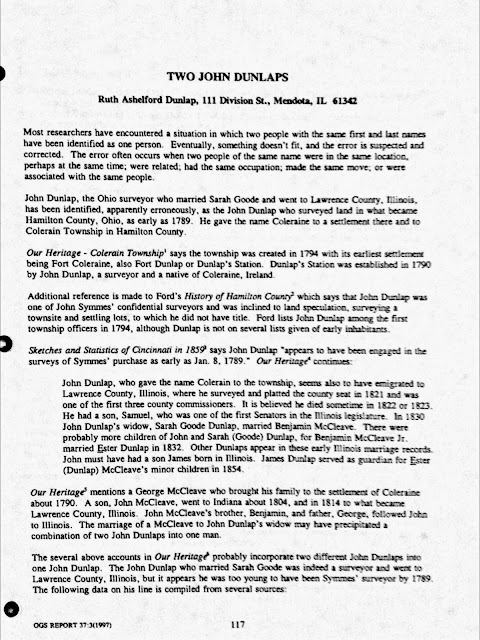 Two John Duniaps
- Samuel Dunlap (b. 1744, d. 18137, son of John Dunlap and Sarah Kincade B) married Mary Ann Howey 4 Feb. 1773 in Philadelphia, Pennsylvania. 9
- Samuel Dunlap lived in Lower Dublin Township, Philadelphia County, Pennsylvania, during the Revolutionary War and served in units there. 10
- In 1805-06 Samuel Dunlap and his grown sons took up 564 acres in what became (in 1808)
Knox and Licking Counties in Ohio. 11
Known children of Samuel Dunlap and Mary Ann Howey: 12
1. James Dunlap        b. 4 Jul 1776 13
d. 1 Aug 1842, age 66, Licking Co., OW 4
m. Mary McCrearey 1799 15 The marriage of James Dunlap to Mary
McCreary 2 Apr 1799 is recorded in Ohio Co., Virginia (Jane Boyd
is listed, probably incorrectly, as James' wife in the referenced DAR
application, but Jane Boyd married William Dunlap, son of James. 16)
James Dunlap was Licking Co. surveyor 1808-1813 Y
2. John Dunlap         b. 25 Mar 178118
d. 2 Nov 1823, Lawrence Co., Illinois19 20
ID. Sarah Goode 21 Oct 1806, Muskingum Co., Ohi0
John Dunlap was the first Knox Co., Ohio surveyor 180821
3. Joseph Dunlap       b. ?, d. ?, was possibly the Joseph Dunlap who married Rachel
Matthew 21 Dec 1812, Licking Co., OhioY Joseph received
distribution from his father's estate from his brother, James, the
administrator. 23
4. Samuel Dunlap       b. 1783
d. age 23 of typhus, soon after family's move to Ohio. 24
Further information of the family is gleaned from a letter written 18 Jan 1900 by William Dunlap (b. 1813, son of James) of Utica, Licking Co., Ohio, to his cousin, James Dunlap (b. 1820, son of John), who lived in Bridgeport, Lawrence Co., Illinois. William Dunlap writes in his letter that he had an "old paper" dated Sept. 17, 1795 which read: "Mr. Samuel Dunlap in account with Baird Dr. to: on compass, one case of instruments, 2 parallel rulers, two drafting scales, two dividers, one two-pole chain." The letter continues:
The question is was our grandfather [Samuel] a Surveyor or did he buy the instruments for
his son John if so did your father [John] learn the Art of Surveying from our grandfather if
he did then my father got his information from the Same and perhaps your father
taught his son Samuel the Art of Surveying . You probably know whether your father took a
compass to Illinois and done some surveying there.
The letter says John Dunlap sold his farm in Ohio to Daniel Falls, and Joseph Dunlap sold his farm to Samuel Hupp. No dates are given but the deeds should be recorded in Knox or Licking County. William Dunlap mentions "your son Lee" in his letter to James in Illinois, which begins "Dear Cousin".
OGS REPORT 37:3(1997)                             118

Two John Dunlaps
Was it the coincidence of two John Dunlaps being surveyors that caused their identification as one man? Was it just coincidence that the widow of John Dunlap married in Lawrence Co., Illinois, to Benjamin McCleave who had been connected to the early Coleraine settlement in Hamilton Co., or was it assumed that both families came from Hamilton County? Were the two John Dunlaps related to each other in some way?
It is fairly certain that John Dunlap (b. 1781, son of Samuel) was not born in Coleraine, Ireland, but in the New World, perhaps in Pennsylvania, although his son in 1880 gave Virginia as his father's birthplace. The Hamilton Co., Ohio, surveyor in 1789 is unidentified, but he may indeed have been born in Ireland. It should be noted that there were a number of men named John Dunlap in the United States during this time period.
Research on Samuel Dunlap and his sons of Licking and Knox counties was undertaken to explore if they were related to Alexander Dunlap (b. 1780 in Pennsylvania) who settled in 1821 at the western edge of Coshocton Co., Ohio, adjoining both Knox and Licking Counties . Alexander had an uncle, Samuel Dunlap (son of another Samuel), who has not been traced. He would not be the Samuel Dunlap of Licking Co. if the latter's father was John Dunlap as identified by Hazel Stock. Her cousin gave her the names of Samuel's parents, but no further substantiation of his parents is known.
Of coincidental interest, Alexander Dunlap was married in 1806 in Ohio Co., Virginia (now West Virginia), the same county where the marriage of James Dunlap and Mary McCreary occurred 2 Apr 1799 (a marriage identified herein as that of James, son of Samuel Dunlap of Licking Co., Ohio). It probably is one of those frequent coincidences that people of the same surname were in the same area but were not related. Further research in Ohio and Illinois could provide additional detail on Samuel Dunlap of Licking Co., and his descendants.