Hi, Bill,
Have you recovered yet from the 1921 census release on Thursday? It was a wild time in Ottawa. The press was all around this one, let me tell you. Email just kept up all weekend
I did a cursory look into the military district, and yes, military district # 2 was headquartered in Toronto during the Second World War.
I would go for you to the Library and Archives Canada, but because of the privacy laws, only the relatives can accessed the files.
So go to http://www.collectionscanada.gc.ca/genealogy/022-909.007-e.html and it will explain what you have to do. They say that it could take up to six months to receive an answer. I would say that that is a conservative answer. But then again, you just might happen to be slotted in an empty spot, and receive an answer sooner than later.
When you do receive an answer, you will be sent a copy of her file by email. If there is something you aren’t suppose to see in the file, it will be blacked out. That is a possibility, too. I wonder if she was regular or reserves.
Let me know how you make out. These questions are always interesting to me, because it gives me a ‘feel’ as to how the LAC is operating these days, with all the stuff that has been going on over the past year.
They have an interesting history of the AV Roe here that may interest you http://www.lib.uwo.ca/programs/companyinformationcanada/cr-lucasrotax.htm
Elizabeth 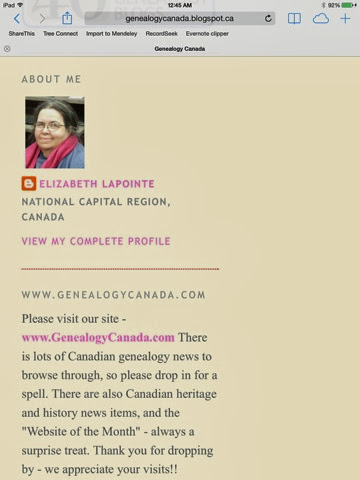 My wife's mother worked for MD2 (Military District - Ont.) during WWII on Bay Street in Toronto; I think it was for around 8 years. I can provide decades of research oh her and the family including a photo/news clipping from the period. I would like to find any proof of her DND employment. I am writing you because you are in Ottawa, and you were so helpful with the recent 1921 census campaign.
Although I am an American by birth, there are no migration questions involved at this point. (She later became an Exec. Sec'y at A.V. Roe in Scarborough, so it is possible some UK security checks were required.)
Do you think you could help. Check the links below. Thanks again.
Bill Robinson
Toronto, Canada