We know that he and a few friends were on the West Side of the Great Miami River, in the Ohio Territory. A small group of natives, probably Shawnee, attacked and he jumped into the water to escape. He was shot in the shoulder, drowned, and his body was found two weeks later near North Bend.
This was in the year following the storied Seige at Dunlap's Station, aka Fort Coleraine. They were surveying near Red Rock.

While the family has usually used the name Burget, or Burgett, there were other variations for many reasons, including possible errors.
-------Burkhardt: 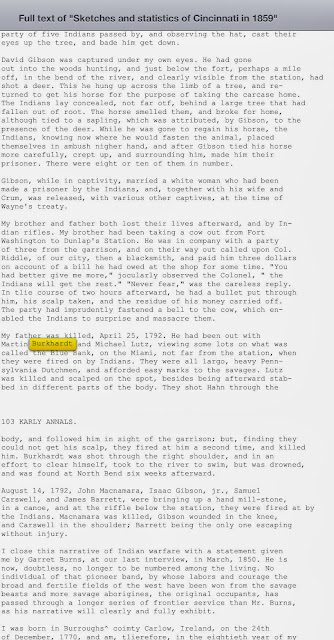 
The Cincinnati Miscellany of Antiquities of the West: and Pioneer History and General and Local Statistics, compiled from the Western General Advertiser, From April 1st, 1845 to April 1st, 1846... by Charles Cist (reprint). Arno Press, 1971. ISBN 0405028326, 9780405028328. 636 pages
Volume II. Cincinnati: Robinson & Jones, 109 Main Street. 1846. Page 132...
"Early Records of Cincinnati.—No. 2.
I continue my extracts from memoranda kept by J. Dunlop, who made the first surveys in the Miami purchase."
"April 25, 1792.—As Martin Burkhardt, Michael Hahn and Michael Lutz, were viewing some lots at the blue bank, they were fired on by Indians, Lutz was killed and scalped on the spot, besides being afterwards stabbed in different parts of the body. They shot Hahn through the body, and followed him in sight of the garrison, but finding they could not get his scalp, they fired at him a second time and killed him. Burkhardt was shot through the right shoulder, and in an effort to clear himself, took to the river to swim, but drowned, and was found at North Bend six weeks afterwards.'" 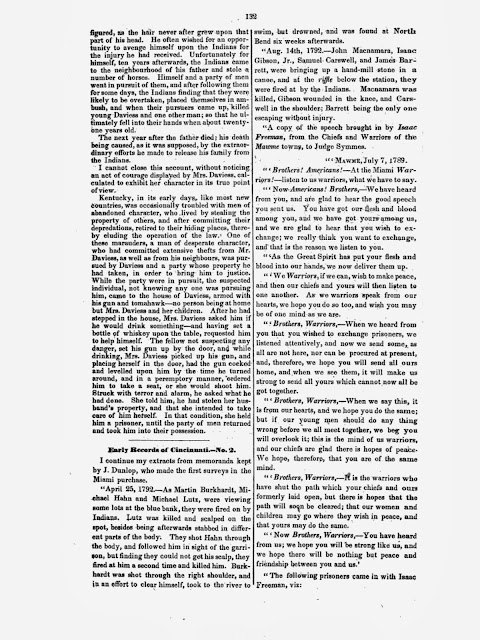 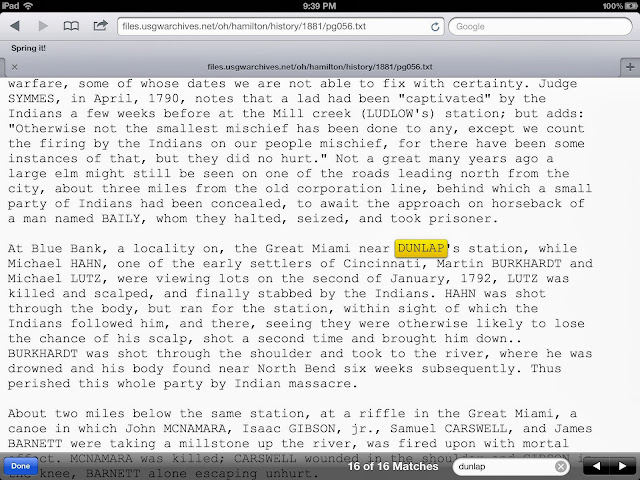 Our Clinton County Archivist seems to have said the following to:
Coleraine Pageant: quarterly publication of the Coleraine Township Historical Society, "Ancestors Corner."...
-------

"Jacob W. /Crum/
Fort Coleraine (Dunlap's Station), Hamilton Co., Ohio
John moved with his family from Pennsylvania to Dunlap's Station, Hamilton Co., Ohio, in 1790. This was located in present-day Coleraine Twsp, just north of Cincinnati on the Great Miami River. Listed as being one of early settlers at Fort Coleraine in Nelson's History of Hamilton Co. (1894), along with brothers David and William, and brother-in-law Henry Whitinger. John probably was captured and adopted by Indians. The story, however, has inconsistencies. There are two main sources: Samuel Hahn's account, recorded in Cist and John Felton's account. The accounts, based on memory, seem to have confused or impossible details. It is even possible it was another John Crum, perhaps a nephew? Samuel Hahn's account and the History of Hamilton County say the capture of John Crum took place at Dunlap's Station (which would make it ca. 1790-91). On the other hand, Wiseman's account of the attack on Dunlap's Station says only that David Gibson was captured, and the Felton account says the John Crum capture took place at Daraugh's Station (making it about 1792), so it is uncertain where this took place.
Jacob Felton was a settler at Daraugh's Station. His memoir gives this account: John Crum and his "little" sister went out to play and pick grapes, about 1/4 mile from the Daraugh's Station fort. When his sister grew tired and went back to the fort without John, the settlers went out to find him, but all they found was his hat and moccasin tracks. (This has the problem that Rebecca in 1792 was married, so was not "little" and likely would not have gone out with John to play. This may indicate the event took place earlier, or that there was another unnamed sister, or that Rebecca may have just gone out with John to get grapes). Jacob Felton continues, saying that John was adopted by the Indians. When he was about 12 he was brought back to his natural parents, but he refused to stay. A year later he was brought back again and finally did stay with his natural parents. [This is another problem with the Felton account, for the ages here don't work with our John and John's father was dead by this time.]
Samuel Hahn was one of the early settlers of Dunlap's Station, and he gave Cist his account in 1859, for Cist's Sketches and Statistics of Cincinnati.
Hahn says the event occurred at Dunlap's Station when John was about 13...